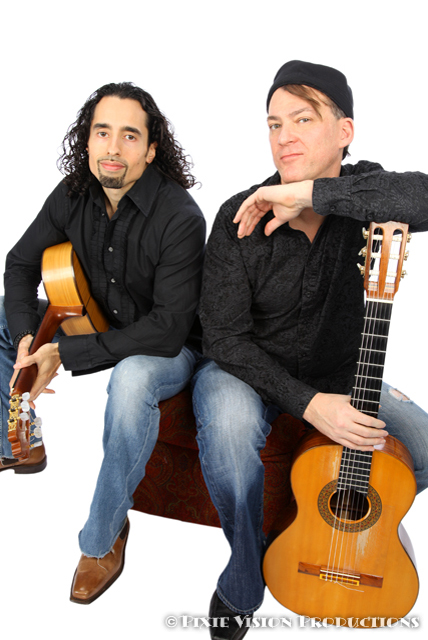 When Chicago based recording artists Guitarra Azul received dual first-ballot Grammy nominations in 2007 for their debut album, Mariposa, I must confess I was surprised. However, my surprise was only at the wisdom demonstrated by the nominating committee, never about the superb musical and recording quality of the disc itself, which I reviewed here in Chicago Jazz Magazine. Such accolades make for a tough act to follow and begs the question, Could the band produce other CD’s that would live up to so much promise? With their new album, Oasis, Guitarra Azul has answered with a fashionable, “Yes, we can!”

The all-original music of Guitarra Azul is hard to compartmentalize, but perhaps is best described as Rumba Flamenco and Latin Jazz with many international influences. Rumba Flamenco retains the heart of more traditional Spanish flamenco music, the flamenco guitar, yet shows a world influence by adding the use of bass, drums, and a variety of percussion instruments. On the song “Tizi Melloul”, the band incorporates elements of flamenco guitar, Latin percussion, Indian classical percussion, Arabic percussion, and some funky American bass for a true international/multi-cultural mix.

Oasis is like a musical snapshot, showing the direction of the band’s artistic journey during the year since the release of Mariposa. So much so, that even some of the songs (“Katerina’s”, “La Tasca”, “Tizi Melloul”,) are named after venues where Guitarra Azul has performed.

Like a master chef carefully trying new ingredients to improve an already acclaimed signature recipe, Stefano, the band’s lead guitarist and composer of all of the band’s original music, has incorporated new musical elements into Oasis. These include hand clapping (“Vino Tinto”), voice as musical instrument (“Tizi Melloul”), the use of a violin, viola, cello string section formed by guest artists (“Oasis”, “Un Beso Mas”, “Bajo las Estrellas”, and “Ojos Gitanos”), and my favorite, the delightful blending of flamenco with tango (“Tango Azul”).

I previously likened Mariposa to an airplane flight to a mythical Spain. Oasis is a return flight there. But with an Arabic/Spanish/Mediterranean feel to this CD, our plane has taken on some new and provocative international passengers for us to become acquainted with on this trip. If you are a fan of this style of music or are interested in becoming one, give Oasis a listen. To top it off, the recording quality of this disc equals that of any audiophile CD I have ever heard.