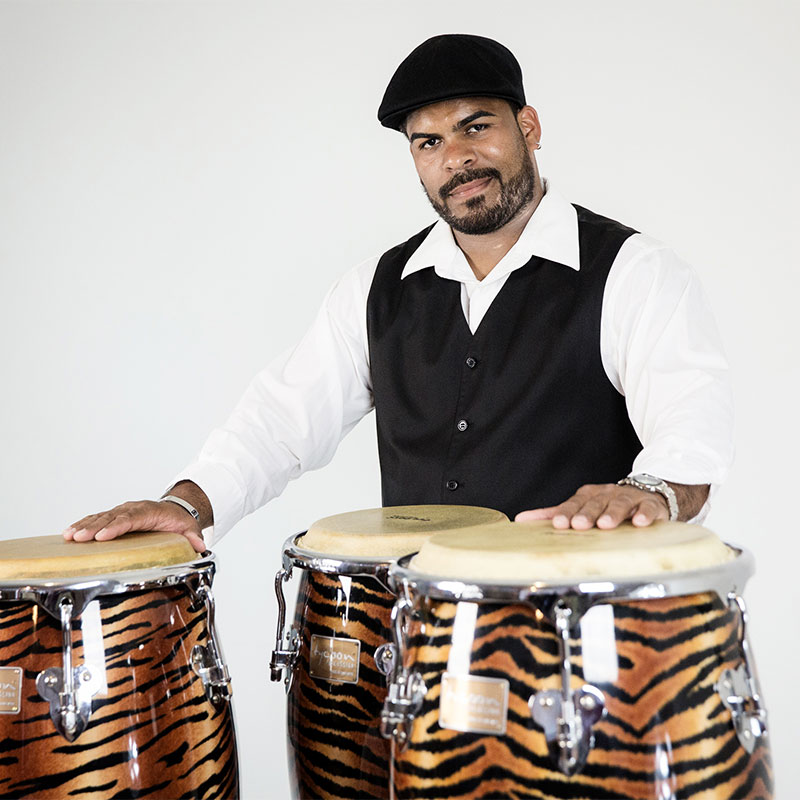 Many people recognize Osvaldo “Ozzie” Aviles for his recent work with the renown World Music Group Guitarra Azul. But his Passion for Percussion began long before then. Some say it began with his Puerto Rican Mother who was an award winning dancer, Others believe his passion links directly to his Father, a percussionist in New York. Still others give credence to his Step Father, a steel drum and Timbale Virtuoso.

There was something about seeing his Dad’s Timbales that served as a dream come true for Ozzie, and as the needle descended on the family’s mammoth collection of Vinyl records, Ozzie’s ear captured the rhythm and foundation for Music! In time Ozzie played along with vinyls and recorded concerts broadcast on TV. Along the way, he picked up as many tips as he could by local Musicians and instructors like: Marcos Vilar, Tito Esponda, Sammy Nieves, David Velez, Alexis Laboy, Tito Rodriguez, Carlos Quinto, Juan Fuentes and many, many more. Through the teaching of these and other legends, Ozzie gained both the confidence and skill to perform on stage

After his elementary school forays, the sound of his nimble hands striking the skins of Drums began to echo at Northwestern University, The University of Illinois, Michigan State University, Malcom X College and many more venues. One of his most memorable shows occurred on our Capital’s steps in Washington D.C.

Ozzie accomplished all of this before he even finished high school. After finishing high school in Chicago, Ozzie’s drive for music intensified as he continued to perform live and record.

With the dedication and support of friends and family, Ozzie established himself as one of the strongest percussionists in Chicago. As bands would come into the city, they would often ask for his rhythms to join their sweet sounds. Sonora Poncena, DLG, Mickey Taveras, Victor Manuelle, Marc Anthony, Tito Rojas, Frankie Negron, La Patrulla 15, and countless other bands specifically sought out Ozzie’s accomaniment as they wowed audiences all over Chicagoland.

Could it be that the Salsa band Son del Barrio, that earned a day named after them by Mayor Daley, helped earn Ozzie the Credibility he deserved to accompany these renown acts? Most Likely, it was simply Ozzie himself, with his radiant smile and magnificent rites that kept these bands calling time and again, regardless, his work with the band Fuerza y Alma brought him to Sony Records in Miami. That put their single in a position to win the “Best Song of the Year” award and “#1 Band of Chicago”!

And he does it with unmatched energy and irresistible smiles, all the while giving credit to God, his Family, and his fellow musicians.